The Joint Admissions and Matriculation Board, JAMB, will from next year commence e-testing of prospective university admission seekers in the conduct of it examinations. 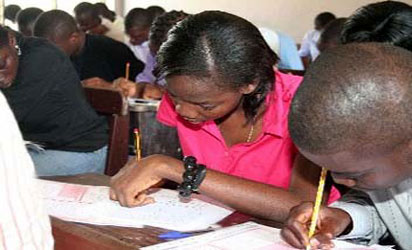 JAMB Registrar, Prof ‘Dibu Ojerinde made this disclosure Tuesday in Makurdi while on courtesy call on Governor Gabriel Suswam of Benue State.
He said the board decided to introduce the electronic testing for prospective undergraduates in order to check the rising cases of examination practices being perpetrated by candidates.
According to him, “The e-testing if finally introduced will check the cases of malpractices by JAMB candidates which has become a source of worry for all stakeholders”.
“When introduced, the e-testing technology would also ensure that our candidates instantly receive the result of their examination at their centres at he end of the examination”, Prof. Ojerinde said.
He said since the e-testing would be computer based, it would encourage computer literacy adding that students could also use cell phones for the examination stressing that the new method which would be put to practice by next year will not be made compulsory for all the candidates.
According to him, ‘what we are going to do is to put the new method to practice as from next year while there is option for candidates to go manual, using pencils and examination sheets, but by the next three years it will be made mandatory for all candidates sitting for JAMB examination to use the new technology’.
“We did a survey and about 76 percent  respondents approved e-testing so starting from next year we will commence putting it to practice but not until three years time that we will fully implement it, so whoever prefer manual next year and in two years time will be allowed”, he said.
He further stated that as soon as the board perfects the new technology, other examination bodies; WAEC, NECO and NTI will follow suit.
Governor Gabriel Suswam who commended the board for the new innovation expressed optimism that it would go a long way to curb examination malpractices in the country and also called on the board to find means of halting the miracle centers across the country.

Email ThisBlogThis!Share to TwitterShare to FacebookShare to Pinterest
Labels: News